With the fifth pick of the 2010 MCM Mock Draft, the Kansas City Chiefs (represented by TNTitans) choose:

Eric Berry, All Around Badass, University Of Tennessee 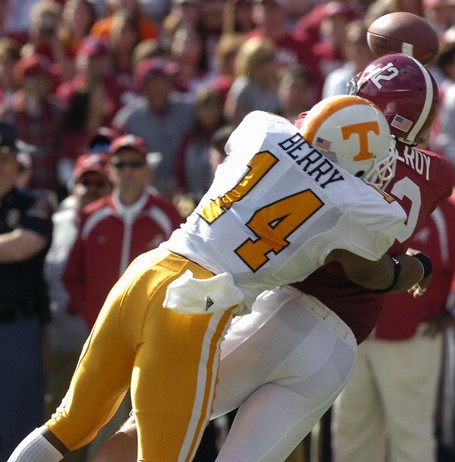 With the top two defensive tackles and the top offensive tackle gone, the Chiefs will go with the best player left on the board in Eric Berry. Although the Chiefs have a number of holes on both sides of the ball, Berry is by far the most talented guy left in the draft. Plus, Berry has been working out with Brandon Flowers in Del Ray Beach (check it) and they've already developed a rapport, for whatever that's worth. While the Chiefs have a less-than-stellar offensive line, anybody but Berry would be a reach at number 5.

Apologies to everyone who was looking forward to the Weis-Clausen reunion!

Now on the clock: TitanFan2K and the Seattle Seahawks