Click through the jump for the stats and some thoughts. 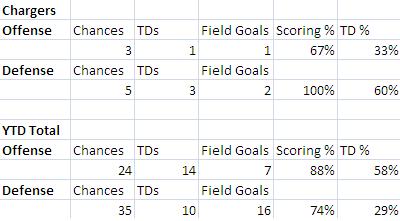 That game was by far the worst effort in the red zone so far. A lot of people have been worried that the strong red zone effort wouldn't be able to he kept up all season long, and while I think they are probably right, I still don't think it is a huge cause for concern. This defense has been better than I thought it would be, but at the end of the day they still aren't the dominant defense that the Titans have had in the past. This is an offensive team so as long as the defense can hold up in the red zone most of the time they will be fine.