Titans vs. Seahawks Preview: It's All About History for Chris Johnson

Share All sharing options for: Titans vs. Seahawks Preview: It's All About History for Chris Johnson 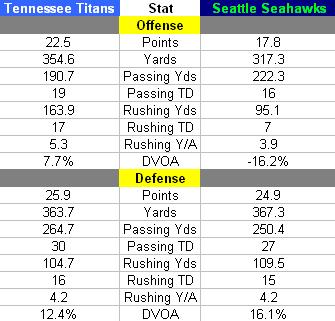 Maybe we should give CJ the ball!!

But seriously, this game mean virtually nothing to either of these teams.  Of course they want to get a win anytime they go out there, but if you read what the Titans players especially have been saying this week it is all about helping Chris Johnson make history.  We have talked a lot about what he can accomplish in this game.  Pretty cool that we had a playoff run to talk about through week 16 after an 0-6 start, and we have a week 17 game where history can be accomplished.  I guess that is about as much as you can hope for in a season where you don't make the playoffs.

There really isn't much else to preview here.  Matt Hasselbeck has been struggling in a big way lately throwing 8 picks in his last two games.  Of course that probably means he will throw 8 touchdowns tomorrow, but that is ok with me because it gives the offense the ball back to give CJ more carries.  Win, win, win.

As you can see above, the Seahawks have had virtually no running game this season.

For the Titans offensively, I like what smash had to say this morning.  VY needs to bounce back, but let's hope that happens on a lot of screen passes and check downs to CJ.

This has been a rough season that will all be over tomorrow, but at least we have a lot of history to root for.  It is important to keep in mind that there is no better place to watch that history be made than the open game thread here at MCM!