The term must win game is incredibly over used these days, but this is a must win game for the Titans.  Sure, they can still make the playoffs if they lose this game, but it sure would be quite the uphill battle.

This really is just another match-up like both of the Ravens games last year.  The Jets have a very good defense and a rookie quarterback who is helped out very much by his running game.  There are two schools of defensive thoughts when it comes to playing against a rookie quarterback; you either blitz him like crazy to try and force him to make a mistake on a quick decision, or you rush four and throw a lot of different coverages at him to try and confuse him.  Which one do you think the Titans will use?

It is hard to say which approach would work better against Mark Sanchez.  The Jets have been using a lot of max protect and giving Sanchez limited reads which makes it harder to get to him even if you blitz.  I would expect the Titans to go more with the coverage approach like they always do.  The one adjustment I hope they make is bringing the corners up to the line to jam the receivers.  They didn't do that against Brett Favre's Jets last year, and it killed them.  It also wouldn't hurt to chip tight end Dustin Keller at the line.

The Titans have been very good against the run so far, but this is the best offensive line and running back combination they have faced.  Taking away the Jets rushing game will be key to the success of the Titans in this game.  The goal will obviously be to put the game on Sanchez's shoulders.

On offense we should see a lot of Chris Johnson.  CJ was gashing Ryan's prized Baltimore defense in the playoff game last season until Ed Reed picked him up and bent him over backwards after the play was over.  Cutbacks are very efficient against over-pursuing defenses, and CJ has some nice cutback abilities.

The Titans have never been much of a screen team, but it would be really nice if they could work some screens in against the Jets.  If they can block up even just one screen it could be the difference in the game.

Of course what the Jets will do is stack the box to try and take away the run and make Collins beat them.  Collins was terrible, you see that Jade?, in the first half of the regular season against the Ravens last season, but he bounced back to have a good second half and playoff game.  The Titans will need him to have that type of game if the Jets are able to take away the run.  He hasn't done that yet this season, oh there it is again Jade, so Sunday would be a great time to start.

Now, in an idea that I absolutely swaggerjacked from wolfpacksteelersfan, here is a table comparing the Titans and Jets stats so far this season.  The last column is the Titans stats minus the Jets stats: 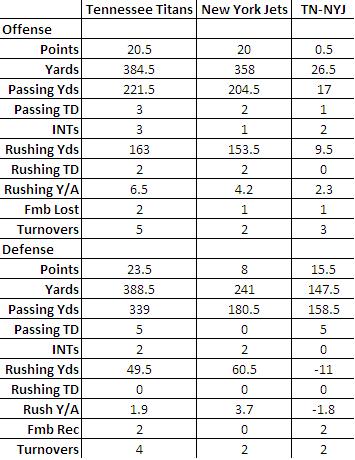 The biggest differences, as you would expect, are in points allowed, yards allowed and passing yards allowed.  Hopefully the Titans will close the gap on Sunday.

Another way to compare these teams is to look at how they did against a common opponent.  Here are the numbers each team posted against the Texans:

Pretty much what you would have expected to see with the biggest discrepancy coming in the passing yards allowed.  We all know that is the Titans biggest problem, and whether or not they can fix that will go a long way in deciding whether or not they win this game.  I think they will and they do.