I am so excited that there is finally some real life football to talk about.  We have been talking about this game for so long that it is almost hard to believe that it is actually happening today.

Entirely to much talk surrounding this game has focused on the terrible towel stuff that happened at the end of the last game.  That stuff is great for blogs, radio shows and message boards, but it means nothing when the ball is kicked off tonight night.

The key for the Titans in this game is to play the same game they did against the Steelers in week 16 last season.  I know that is over-simplified, but it really is the truth.  The Titans got after Ben Roethlisberger all day long, and in doing so they were able to keep him funneled into the pocket.  From all reports I have heard, the Steelers spend a significant amount of time in practice working on plays where Big Ben has broken contain.  Last season the Titans were able to really punish him without letting him escape.  That will be key once again tonight.

Take a look at these numbers from that game last season: 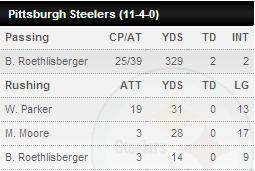 Those numbers don't even show the 5 fumbles the Titans defense forced or the 5 times they were able to sack Roethlisberger.

The other key you see there is that the Steelerswere only able to gain 73 yards on the ground.  If the Titans can put up a similar effort tonight, it forces the Steelers into obvious passing situations.  That is where the Titans defense will excel.

As you can see below, the Steelers defense was very, very good against the run last season.  The Titans actually had success against them last season.  Chris Johnson racked up 69 yards on 16 carries and LenDale White added 48 yards on 15 carries.  We all know the Titans are committed to the run even when it doesn't work.  We will probably see quite a few running plays tonight that go for next to nothing, but it only takes a couple of seams for CJ to keep the defense honest.

Kerry Collins was also very good in that game last season going 20-29 for 215 yards with 1 touchdown and 0 interceptions.  We all know that is the game the Titans need him to play.  If he puts up similar numbers tonight it will be a good night.

As always in a game like this, special teams will play a huge role.  The Steelers have a new return man, Stefan Logan, who has apparently lit the world on fire this preseason.  Containing him will be very important for the Titans.

Special teams is a bit of a question mark for the Titans.  I expect to see Javon Ringer returning kicks, andall indications are that Cortland Finnegan will handle the punts.  The long term goal is for Ryan Mouton to handle punts, but they don't think he is ready tonight because of his injury.  They also probably don't want to throw him right into the fire coming off that injury as a rookie in a game of this magnitude.  Say a little prayer every time a punt goes in the air that nothing happens to Finnegan.  We all know what losing him would mean.

There is no doubt that this is a tough game in a tough atmosphere against a tough team, but it is a game that the Titans match-up well in.  Take care of the ball and good things will happen.