First and foremost, it is great to see football again.  The offseason was always long for as a football fan, but since I started working on this blog it seems even longer.  I know this game didn't count, but it was great to see the team take the field again.  It means that games that matter are just around the corner.

The first team offensive passing game looked really sharp.  Nate Washington made his presence know early and looks to have the speed this team has desperately needed on the edge.  It will be even more fun to see the passing game once Kenny Britt works his way into the mix.

Alge Crumpler did not lose 40 pounds in the offseason, but he did make some nice catches early in the game.  If they can get him involved in the passing game this season it will open a lot of things up that weren't there last season.

The first team did not look good running the ball.  Chris Johnson was able to make a couple of nice runs, but on most of his carries he had nowhere to go.  As good as this offensive line is, they weren't that good run blocking (ranked 15th DVOA, (thanks hal)).  Some of that should work itself because teams are going to have to respect the passing game more this season, but they still need to get better in camp.

The first team defense looked solid.  We all know Michael Griffin is a stud, and he started showing the nation tonight with a pick on the first series.  Someone alert the media, game one without Albert wasn't a disaster.

I am sure there will be plenty of Vince Young discussion here going forward, but for now all I will say is that he looked terrible tonight.  I definitely did not see the improvement I was hoping for with his alleged dedication in the offseason.  He will be the #3 QB when the season starts if he doesn't look any better than that before the season starts.

I will leave you with this question; What is the over/under on times we see this in 2009: 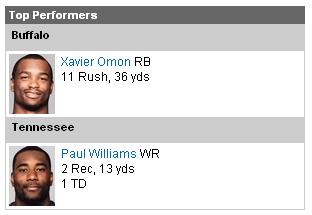