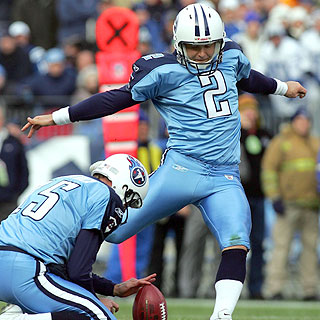 I had the opportunity to ask Rob Bironas some questions. Thanks to Bironas's assistant Mindy Knight for making this possible.

You started off your pro career in the Arena Football League, and had to also work at Best Buy to supplement your pay. How much has your life changed since then? How does it feel when people recognize you in public?

Actually I started in the Arena2 League before the Arena League.  My life hasn't changed too much.  I still try to maintain a reasonable lifestyle and be humble knowing I'm blessed to be in the situation I am.  Obviously, I am no longer working 2 or 3 jobs as I did back then just to get by and pay the bills, but I still set goals for myself and try to accomplish them.  After all, that is how I made it into the NFL...perseverance, determination and hard work! At first, I thought it was weird to be recognized in public.  I am used to it when it happens now...I just smile, say hello, maybe sign an autograph or take a picture.  These are Titans' fans and I think its cool they recognize their players out of the uniform.

What inspired you to be an NFL kicker? How did you discover your gift of kicking?

I wanted to be a professional soccer player when I was young.  In high school, that transpired into wanting to play in the NFL when I began kicking the football and I knew I could become pretty good at it. I always had a big leg on the soccer field, kicking goal kicks, corner kicks and free kicks.  The transition to the football field wasn't too difficult to make.  My younger brother Greg actually practiced with me in our back yard aiming at pine trees as he was my first kicking instructor.

Much more after the jump...

To start off, I was full of adrenaline!!!  It was a kick I knew I could make because the conditions were right and I was pumped up! With a good snap by Ken Amato, hold by Craig Hentrich and blocking by the line, I knew all I had to do was get the ball up and headed the right direction and we would end the game there!  I was stunned when Coach Fisher called the time out and sent the punt team out.  I came off to the sideline telling him I could make it, little did I know he was just tricking Dungy into using his last time out.  As soon as that happened, he sent me back out and I said to Craig, "Let's do this so we can go home!"  He told me, "Just do what I do and don't put any more into it than normal."  So we lined it up, made sure we had a good spot on the paint to kick from, I took my steps back and gave him the nod... Set... Snap... Kick!  It seemed like forever before the ball finally made it through the uprights.  Our arms went up immediately knowing it was straight down the middle, we just had to wait 4 or 5 seconds for it to get to the other end of the field!  When the officials' hands went up, there was nothing but excitement and celebration left to do.  I remember running around on the field for a few moments before the rest of my team tackled me in celebration.  It was definitely a moment to remember!

What about your Texans game in which you had eight field goals? What was going through your head?

Well, to tell you the truth, I wanted to think nothing about the number of field goals I had kicked.  It's always that way in a game. I'm only thinking about the next one, not whether I made or missed the last one.  In that game specifically, I had to tell a bunch of people to leave me alone during half time and throughout the second half.  I didn't want to think about any of it.  I just wanted to be ready for each time I was called onto the field by Coach Fisher.  I can remember questioning where our lead had disappeared to in the 4th quarter, but when it came down to that last 29 yard field goal, I knew we were going to be getting on the plane with a victory and that's just what we did!  Kicked an NFL record 8th field goal to win the game as time expired, so we could leave Houston with the win!  It was a very unique situation and I was glad everything worked out between the uprights after each ball left my foot!

Do you have any rituals or superstitions before you kick? How do you deal with the nerves?

I don't really have any rituals or superstitions before each kick other than warm up and be ready to kick each time we have the ball. You never know when you're going to have to kick a field goal.  I think rituals and superstitions just get in the way.  If I did have some or believed in superstition, I would need to do all the same things each time and be worried if I forgot to do something or if something wasn't just as I believed it needed to be.  This way, I can just concentrate on kicking the football each time I'm on the field on Sundays!  As far as nerves go, I learned years ago they don't help me get through a kick.  Whether it be an extra point at the beginning of the game or a long field goal to win it at the end, I just try to make the same kick each time.  I know that I am not going to make every kick, but I also know that I am going to make most all of them. So that's what I do, just go out there to make one kick at a time, no extra thought about it, just repeat the same thing each time.  One kick at a time!

The kicker is a very underrated position in the NFL, and you are one of the highest paid kickers in the game. What do you have to say to all who think that the kicker is not important to a football team?

Well, I don't have to say much at all.  My foot and every other kicker's foot does the talking for us.  A touchdown would only be worth 6 points, not 7 without the extra point at the end.  The ball would be turned over to the other team if the kicker didn't attempt a field goal or the punter punt it away when the offense comes up short of a first down.  The game would never even begin without the first kickoff kicked by the kicker.  I love my job, it takes countless hours of hard work, determination and dedication.  I hardly ever get a second chance and need to be near perfect to just keep my job.  The pressure may get some people, but every kicker must know how to put that pressure in the back of their mind and not even think about it. Many of my teammates tell me I have the best job ever.  They would love to be the kicker except on Sundays when we are down by 1 or 2 points, there's 2 seconds on the clock and it's up to me to put the ball through the uprights.  In that case, they're glad I'm the guy kicking the football and not them!

You have said that there is nowhere you would rather be than Nashville. What contributes to that?

Well, I love playing here in Nashville for the Titans and Jeff Fisher.  He is a great coach and we have a great group of guys that make the Titans a unique team.  I was raised in Louisville, KY and most of my family still lives there.  It's an easy drive for them to get to games and for me to get back home.  The city, the people and the community are very similar to what I grew up with, so I feel close to home in that regard as well.  Nashville is a small city, big town type place and I love that about it.  The entertainment and atmosphere is like no other and we have the best fans in the NFL cheering us on.  I just love it here and so far, the city of Nashville seems to love me being here.  I wouldn't want to be anywhere else.  I know I'm blessed to be doing what I do right here in Music City!  I hope to play out my career in Nashville and retire one day having only played for a single team, the Tennessee Titans!

Often in the life of a kicker your play makes you a hero or a zero; how do you respond to the "hero" moments? What about the "zero" moments?

What are your goals for the 2009 season?

My goals for this season are the same as each year.  I want to win one game at a time and help put the Titans into the Super Bowl!  We don't train year round for any other reason, but to try to be the best team on the grid iron each Sunday.  My personal goal is to be ready to make each kick when Coach Fisher points to me and calls "Field Goal!"  I want to make a return trip to the Pro Bowl and the All-Pro team again this year.  I was alternate last year and that wasn't good enough for me.  I know its hard to accomplish, but I like being on top and being the best at what I do.  I've been there before and have plans to be back!  That's why I work so hard year round perfecting my ability and tweaking little things here and there.  I'm always looking for ways to do better and be better.  Without goals and aspirations set high, I wouldn't be pushing myself to be as good as I could be.  I always want to be my best!

A huge thanks to Rob for doing this!