The Road that Lies Ahead: Week 1 @ Pittsburgh

Share All sharing options for: The Road that Lies Ahead: Week 1 @ Pittsburgh 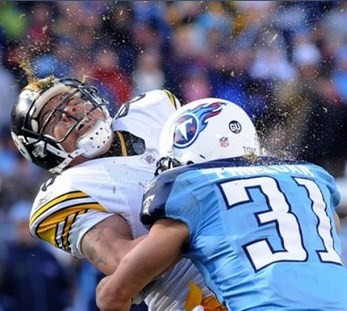 With training camp only a week away, I can almost taste it.  Football season will soon be upon us and the black hole of interesting sports that is the month of July will have finally passed.  With training camp on the horizon and, with it legitimate football news, it's time to get out the last drops of preseason speculation.  What follows is the first entry in a 13 part series in which I will give a broad overview of the teams standing between the Titans and the playoffs.  I will go through the schedule in order, saving the divisional opponents for last.

This season, besides the 6 divisional games, the Titans get the NFC West and the AFC East, as well as the other 2 AFC Division Champions from last season (Pitt, SD). The first 6 weeks look to be nothing short of brutal, with road trips to Pittsburgh, New York, Jacksonville, and Foxboro, and visits from Houston and Indianapolis.  The schedule makers did Tennessee no favors there.  The goal for the Titans will be to simply survive early on this season and then cash in on some more favorable match-ups in the second half of the season, when they will close with 3 of the last 4 games at LP Field.

After the jump, I will start things off with a preview of the grudge match which opens the NFL regular season on Thursday, September 10 in prime time between the Tennessee Titans and the Defending Super Bowl Champion Pittsburgh Steelers.

Last season these were two very good footbal teams.  The Steelers went 12-4 during the regular season, winning the AFC North Crown en route to the Super Bowl, where they defeated the surprising Arizona Cardinals 27-23 to secure the franchise's sixth NFL Championship, and first under Head Coach Mike Tomlin. According to the statistical gurus over at FootballOutsiders.com, who use Defense-adjusted Value Over Average (DVOA) to rank teams, the Steelers paired the #1 overall defensive unit, headed up by James Harrison and Troy Polamalu, with the #21 offense, led by QB Ben Roethlisberger.  When looked at all together, the Steelers ranked #2 overall last season in Total DVOA.

These two teams met last year in Nashville during Week 16 with the #1 seed in the AFC Playoffs at stake.  The Titans ran away with it in the second half, proving to be a nightmarish match-up for Steelers.  The Titans neutralized their defense by protecting Kerry Collins from their fearsome pass rush, running the ball, and minimizing turnovers.  On the other side of the ball, the Titans, missing stars Haynesworth and Vanden Bosch were able to exploit the Steelers young and ineffective offensive line to the tune of 5 sacks, 2.9 yards per carry and 5 forced fumbles.  Michael Griffin came up huge with 2 interceptions, including a late 83 yard touchdown return dagger to send the final score to 31-14.

I was there, it was awesome, we stomped some towels.  One of the worst parts of going away to school has been missing out on my family's season tickets.  Interestingly enough, I only got to attend 2 regular season games last season: the Jags in Week 1 and the Steelers in Week 16.  I was there for VY's meltdown, and I was there for the true masterpiece of the season.  Unfortunately, things would not be this good again, as the Titans had a nightmare game of their own only 3 weeks later.  But on that day, it was electric at LP Field.

When talking about any good Steelers team, the conversation always begins with defense.  As mentioned, last year the Steelers led the league in Defensive DVOA, as well as both yards per game (237) and scoring (13.9 per game).  They excelled at putting teams in nasty down and distance situations, as well as getting off the field on third downs.  This is indicated by their #2 overall defensive DVOAs on both first and third downs.  They ranked 2nd in the NFL with 51 sacks.  Their secondary was also outstanding, coming in tied for 4th with 107 passes defensed, and tied for 6th with 20 interceptions.  Any way you look at last season, the Steelers had an incredible defense that returns 9 starters this year.

On offense, the Steelers have several ways to hurt opponents in the passing game.  They return 2 Super Bowl MVP's at the wide receiver position with Hines Ward and Santonio Holmes.  Ward particularly had a good year, eclipsing the 1000 yard mark with 7 TDs and recording the 7th best DYAR for a WR-- Football Outsiders' measure or aggregate value over a season.  They will also look for 2nd year man Limas Sweed to contribute as the #3 receiver in the wake of Nate Washington's departure to the Titans.  At tight end, Heath Miller ranked 8th last season in DVOA, and caught 73% of the passes that came his way, making him one of the most reliable targets in the league at the position.

This one is easy.  The Steelers offensive line, which started a rookie and two 2nd year players, was abysmal last season.  When these two teams met in Week 16 last year in Nashville, a Titans D-line missing both Albert Haynesworth and Kyle Vanden Bosch abused them all day, including a 3.5 sack outburst by rookie Jason Jones.  The front four were in the backfield early and often, generally manhandling them all game.

The DVOA stats only further reinforce my contention that this was one of the worst offensive lines ever to win a Super Bowl ring.   On running plays, the Steelers offensive line ranked  24th in the league, comfortably below average.  But it was on passing plays where they really fell apart.  The Steelers surrendered 50 sacks, approximately 1 sack for every 11 (9.2%) times Roethlisberger dropped back to pass, or roughly 3 times as often as the Titans gave up a sack (3.2%).  Only three teams gave up sacks with greater frequency(Oakland, San Francisco, Detroit) and they combined for a 12-36 record last season. I know some of the blame for such a high total has to fall on Roethlisberger's shoulders for holding onto the ball too long, but I was in attendance for the Steelers/Titans contest last season and it was obvious that the level of chaos the Titans inflicted on the Steelers line of scrimmage had plenty to do with the big guys up front.

The Steelers made no immediately substantive changes to this unit in the offseason, choosing instead to return each guy that started 11 or more games last season.  They did use 2 draft picks on Kraig Urbik, G, from Wisconsin and A.Q. Shipley, C, from Penn State, but expecting rookie contributions from the 79th and 226th overall picks is a bit of a stretch. Until something comes around with this group, the Steelers will continue to struggle to beat good teams that can get after the quarterback (such as their losses last season to the Giants, Eagles and Titans where they allowed a combined 19 sacks.)

The biggest question that I have about the 2009 Steelers is the running game.  Willie Parker simply has not been the same player over the last two season that he was in 2006 when he recorded almost 1500 yards and 13TDs.  He was banged up last season as well, which gave Mewelde Moore a chance to see significant carries.  Moore did as well as anyone could expect in a limited, back up role, earning the 6th best DVOA among running backs last season.  However, the Steelers ranked just 23rd in the league in rushing yards per game.  Going back to 2004, the Steelers had ranked 2nd, 5th, 10th, and 3rd over the previous 4 seasons in that stat, so a drop to the bottom quarter of the league was fairly surprising.  I would expect the Steelers to focus a good deal on getting the ground game back on track this year, perhaps on the shoulders of 2nd year pro Rashard Mendenhall.

The Steelers lost starting cornerback Bryant McFadden to the Cardinals this offseason, leaving them with some questions about cornerback depth.  Ike Taylor is solid on the left side, but at present they are relying on soon-to-be 35 year old Deshea Townsend on the right side.  Townsend started 4 game last season and was serviceable, recording 2 INTs and 8 passes defensed.  Much like the Titans, the Steelers will be crossing their fingers and hoping that their mid-30's CB can hold it together this season.

It's really quite amazing how much punishment Big Ben takes. In his 5 seasons (72 total games) in the NFL, he has been sacked a whopping 192 times.  To put that into perspective, he is on pace to pull even with John Elway for the most sacks in a career (516) in his 194th game, two and a half seasons fewer than it took Elway to rack up that kind of abuse (234 games).  Roethlisberger struggled (statistically) last season, registering his 2nd worst year as a starter, with a 17:15 TD/INT ratio and sub 60% completions.  Interestingly enough, in the two seasons where Roethlisberger's attempts have far exceeded 400, (469 attempts in both 2006&2008), his stats have been the worst (QB Ratings of 75 and 80, respectively).  On the other hand, he has never fallen short of a rating of 98 in the 3 season where the Steelers have kept his attempts down and leaned more on the run.  The real question here relates to what has been said earlier.  Can the Steelers give Big Ben more protection and a reliable run option this season in order to allow him to be more efficient in the passing game?  WInning aside, getting sacked 40 times a season is a career path that is low in longevity.

KEYS FOR THE TITANS:

The trick for the Titans in Week 1 will be to keep their heads down and just play football.  After the Terrible Towel Massacre of 2008, (a lot of good towels were lost out there), emotions from Pittsburgh players, and especially the Pittsburgh crowd are going to be turned up to 11 on the amplifier.  I hear they are even unveiling a public monument in memory of those lost towels, and a scholarship fund for the children of those towels, left fatherless in the melee.  All self-righteous overreactions aside, there is no reason at all that we shouldn't see a result very similar to last year's for the Titans if they just do what they do best.

If everyone is healthy come Week 1, Tennessee will put a better defensive front line on the field than they did last year against an o-line that bares startling resemblance to the Pittsburgh group from last year.  The Titans have added more weapons on offense, while keeping the same offensive line that surrendered only a single sack to James Harrison in the Week 16 meeting.  The bottom line last season was that the Titans matched up very favorably with the Steelers' strengths and weaknesses, and there is no reason to think that will change this season.