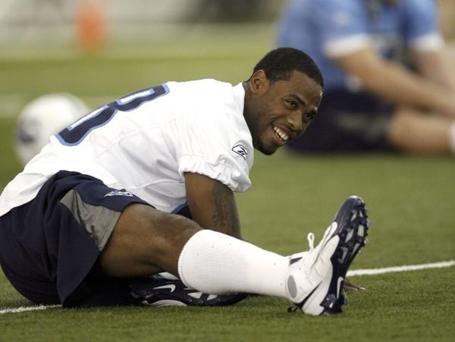 Congratulations to David Climer for being the first to start wondering/proclaiming Kenny Britt as another cursed Titans WR thanks to hamstring injuries limiting his ability to practice in the OTAs.  Britt will have plenty of time between now and camp to rehab the sore muscle, and that should give us an early indication of how dedicated he is to doing the less glamorous work it takes to win in the NFL.

Smash and Dash are now  "Smash and I'm Going to Whoop His ... We'll talk." according to LenDale.

Sen'Derrick Marks feels really lost a lot of the time, but the highlight here is Jim Washburn's expert explanation of why NFL O-linemen are so much harder to deal with:

"Remember your grandfather and that old man strength?" Washburn said. "That's sort of what it is. It's just different."

Steve McNair has opened a new restaurant on Jefferson St., near TSU called Gridiorn9.  If you're looking to casually run into some Titans, this seems like the place for now because Vince Young, Keith Bulluck and Jevon Kearse were all there Monday.

Our intrepid podcast producer, pigskinpunditspoints us towards this gem:  Looking for a cheap ticket to a road game?  So far 15,000 season ticket holders for the Jaguars have chosen not to renew their tickets, and new salses aren't putting a dent in that number. According to the Jacksonville Business Journal, 65% of those who didn't renew cited the economy as to why they passed, while MCM internal numbers show that the rest cited Jack Del Rio being a massive jerk.

Now that the slower period of the off-season is upon us your help in finding out of the way Titans stories is more important than ever.  If you have a link you'd like to submit for tomorrow's Morning Links email me at mcmaugustwest@gmail.com! (Be sure to include your commenting handle so I can give you glowing, semi-anonymous credit.)