Share All sharing options for: Official Details On 'Legacy Games' To Celebrate 50 Year Anniversary of AFL 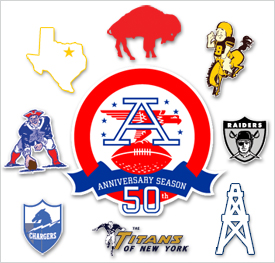 In addition to the Hall of Fame Game against the Bills, the Titans will wear the 60's era Oilers uniforms against the Patriots, Jets and the regular season match-up against the Bills.  I think it's a really cool thing the NFL is doing to commemorate the founding of the AFL, which merged with the NFL in 1970 to create the basic structure of the league we see today.  It'll really be a blast for Al Davis and Bud Adams, who still own and are involved with the teams they founded, to see their guys wearing the uniforms that started it all.

I know Houston fans won't be very happy about it, but there's not a lot anyone can do about that.