The Mortensen Family Conspiracy Hour: Brought To You By The Fine Folks At The Tennessee Titans

Share All sharing options for: The Mortensen Family Conspiracy Hour: Brought To You By The Fine Folks At The Tennessee Titans 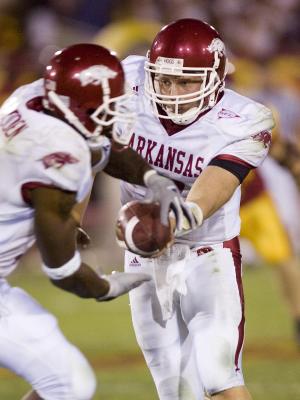 The Big Lead is a good blog. Not great (too much celeb-gossip junk and an occasionally amateurish understanding of some major sports), but good. I commented heavily on the site for a year or two before I really started to focus on MCM. One of the things that separates TBL from the likes of Deadspin, et al. is the coverage of sports media, and he's pretty good at that aspect.

That being said, TBL is raising the question of impropriety in the signing and I'm a little perplexed:

Mel Kiper Jr., ESPN’s top analyst, said young Mort should go into coaching. So why did the Tennessee Titans sign him as a free agent? Two conspiracy theories we’ll float:

* Titans coach Jeff Fisher did it as a favor to ESPN’s Chris Mortensen in hopes of favorable coverage of the team. Perhaps ESPN will take it easy on the Vince Young saga that was huge news for about a month last year? Also, the Titans are going to be worse this year - they have a dinosaur at QB, lost one of their best defensive players, and play Pitt, Indy and New England in three of its first six games this season.

* Everyone already knows that Houston Nutt ruined the Arkansas program with the Mustain saga; why is that guy in charge of evaluating talent? Alex Mortensen couldn’t sniff the field in his first run Arkansas, but look, the Titans signed him!

Nevermind the comment about how we'll be worse (not many teams win 13 games two seasons straight; to expect that again is a little absurd), or that TBL's evidence that Mort has a great source with the Titans is this story (which was old news to anyone who watched/listened/scanned anything Fisher said after the Ravens game), are the Titans trying to grovel to Mort?

I'm not buying for a second that this is an attempt to win favor with Mort or ESPN; if we wanted that we would have held on to Pacman and signed T.O. Instead, my money bet is that the reverse happened: Mort called in a favor to get his kid into camp. I'll leave the ethical debate up to you folks in the poll and in the comments: