Tennessee Titans Morning Links: It's Like 'The Hills', But With Less Likable People Edition

Share All sharing options for: Tennessee Titans Morning Links: It's Like 'The Hills', But With Less Likable People Edition 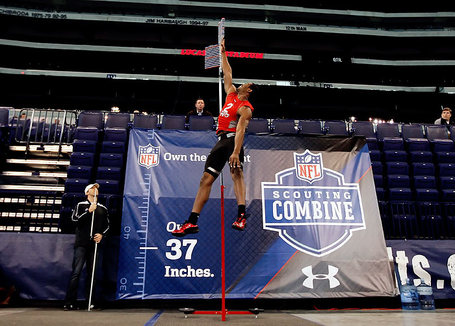 Kevin Dyson understands better than almost anyone else the pressure of being a first round receiver with this franchise, and he has some wise words for Kenny Britt:

"The best advice I could give [Britt] would be to just worry about yourself... he is coming on a team that is sort of established and is just trying to add a couple of pieces. He's in a situation where he can just worry about himself. You know people will be shouting your name if you drop a ball and there will be pressure. They will always expect him to do more, but you can't worry about all that stuff.''

PFW looks at the interesting decisions the Titans will have next off-season when Bulluck is a free agent (unless management addresses that this year) and Thornton enters the final year of his contract.  you have to believe that the progress of Keglar and McGrath this year will have a big impact on where they go...

Boom King is helping build his legacy in Nashville by bringing the bass boom to Nashville kids, thanks to the $50,000 in audio recording and video editing equipment he just donated to the Boys & Girls Clubs of Middle Tennessee.

The Cowboys picked Clemson safety Michael Hamlin with the pick we had to ship after Pac started being Pac for them.  So, the full trade ended up with the us getting Lavelle Hawkins for Pac and Michael Hamlin.  Only time will tell which player does more in the NFL.

Comcast backed-off of their plans to drop the NFL Network all together, and plan to continue offering it on the death-nail sports package ensuring that most folks won't see it.  Here's a recap of the very mature fight these two spoiled high school girls high powered corporations are having:

Comcast, the nation's largest cable company, said the NFL asked for a 350 percent increase in the fees it would pay to carry the network, according to documents filed with the Federal Communications Commission.

Since the fees are based on the number of viewers, Comcast was able to pay less to the NFL Network by moving the channel from a digital tier with 8.6 million subscribers to a sports package that has 2 million subscribers and costs an extra $7 per month. The Philadelphia-based cable operator said it was allowed to do so under their contract, signed in 2004.

The NFL said Comcast made the move in retaliation for not getting the rights to show eight live NFL games for its Versus sports channel.

The NFL pointed out that Comcast rivals such as Dish Network Corp., DirecTV Group Inc., Verizon Communications Inc. and AT&T Inc. all agreed to the same rates to carry the network. The NFL Network also said that with a smaller audience, it couldn't get sports packages like Pac-10 Conference college football games, which had a minimum viewership requirement.

It has also been reported elsewhere that the NFL said Comcast had a very big butt and dressed like a common tramp.  Comcast's responding text message could not be decoded by MCM staff.

Now that the slower period of the off-season is upon us your help in finding out of the way Titans stories is more important than ever.  If you have a link you'd like to submit for tomorrow's Morning Links email me at mcmaugustwest@gmail.com!  (Be sure to include your commenting handle so I can give you glowing, semi-anonymous credit.)