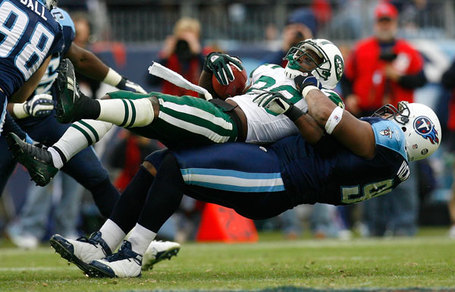 Let the great debate begin: Patrick Ramsey is gunning for that no. 2 spot. Will he get it, and will it be the end of VY here in Nashville?  I seriously doubt Ramsey beats VY, but if he does that's it.  Terry McCromick weighs in here, and Jim Wyatt chimes in as well plus an interview with Ramsey.

Who was the last team to enter the season with 3 first round picks at QB (excluding the supplemental draft)?  The 1989 Jets with Ken O'Brien, Tony Eason and Mark Malone.  That's certainly not inspiring company.

Marcus Johnson, the former Vikings OL who the Titans had worked out, signed with the Raiders yesterday.  Since we haven't heard of many other work-outs at that position I'd say that as of now they're planning on replacing Daniel Loper via the draft.

PFW looks at the signing of Demarcus Faggins and agrees with the rest of what I've read: great locker room guy who has stuck around a longtime no matter how hard the Texans tried to replace him.  He'll never start for a great defense, but you can certainly do a lot worse as far as guys you bringing to camp to compete for a depth position.

If Plaxico Burress gets to keep his bonus money, then Ricky Williams ought to raise all knds of hell over the fortune he had to return to the Dolphins and Saints.