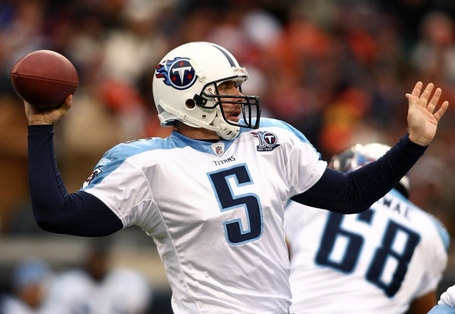 So before we all freak out about it, can someone explain to me how Patrick Ramsey's role here is any different than that of Tim Rattay, Ingle martin, Chris Simms or even Billy Volek back in the day?

Must be nice to be Chris Johnson, who managed to lose weight last year by eating fast food.  He's swearing to avoid those empty calories this year so he can keep his playing weight up around 200 lbs. throughout the season.

Jim Wyatt has another flurry of players working-out for the Titans as they prepare for the draft:

Ocho Cinco alomst went to the Redskins last year in a trade that would have brought back 2 first round picks.  This year the Bengals look much more ready to move the unhappy WR, and for much less.  Under this theory the Bengals would be targeting Jeremy Maclin in the draft.

MCM would like to extend a huge thank you to whomever is responsible for redesigning the Titans' official website, and for brining it into the 21st century.

For those who are still interested, Peter King has a monumental breakdown of the Jay Cutler trade and who all was involved.

Apparently the Lucas Oil Feild, home of the Colts, is running $47 million in the red due to a 'miscalculation' of the day-to-day costs of running the facility. If the legislature doesn't approve a new tax bill to cover the overages, then the building may be shut down... of course that's just a scare tactic that won't ever happen, but you don't hear a threat like that everyday regarding a brand new NFL stadium.

In this week's news of the bizarre: photographers trying to sneak some pics of Tom Brady's wedding were fired upon by members of the brides' security team. Who who have thought the new Brady rule applied in Costa Rica?