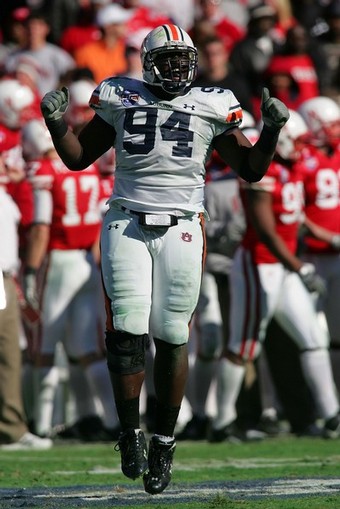 Kenny Britt's dominating play didn't just start over night; even his high school coach could tell he was destined for great things.

You have to love how excited Sen'Derrick Marks is to be a Titan.

For the first time in 2 years the Titans didn't draft a single defensive end, and Gary Estwick says that bespeaks how comfortable they are with the starters and depth at that position.

Estwick also takes a look at job security among the coaches across the AFC South to see who can get comfortable and who's on pins and needles.

Paul K must have been reading the comments of yesterday's link post, because here he looks at Titans WR coach Fred Graves, who has a lot on the line with Kenny Britt.  I'd also keep an eye on Rod Smith, who is coming to Nashville to work with Britt: he and Dinger are very close, and we all know how much the Titans like have (future) Hall of Famers on the staff...

Mel Kiper thinks Marks was overrated, and that led to our C+ score from him:

Cool Name, Bad Pick Award: The Tennessee Titans had a decent draft. They got WR Kenny Britt and TE Jared Cook, who will both help them in the passing game. But the reason Kiper gave them a C-plus and not a B was because they reached in the second round for a guy with a cool name: Sen'Derrick Marks. Kiper thought Marks was overrated. We think he has the best handle on the draft.

Ross Tucker has some sound advice for this year's rookie class.