Mike Heimerdiger on Wide Receivers: Straight From The Horse's Mouth

Share All sharing options for: Mike Heimerdiger on Wide Receivers: Straight From The Horse's Mouth 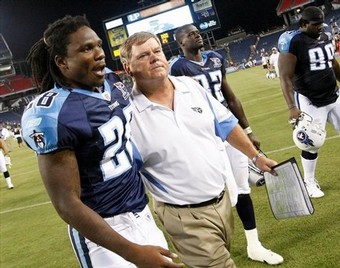 No links this morning because I'm on vacation, but I thought I'd pass along a little treat I found.  It's Mike Heimerdinger discussing how he evaluates WRs in the draft.  It was something he had some real success with his first time around (considering Mason, Bennett and McCariens all owe a career to his tutelage), and from the sounds of it he's expecting a WR to come early this year:

''The first thing I look for is if a guy can get off the bump-and-run,'' Heimerdinger said. ''I put a lot on the Senior Bowl and the one-on-one's there because it's one of the few times you see a lot of press coverage.''

''Then I look to see what a guy does after he catches the ball. Does he dance? Does he turn it up hard, get extra yards? That's really important because I think there are a lot of guys in this league that if you take them out and run a 40, they'll run a 4.3., but when you watch them on film they play at 4.7.''

But even if the receiver passes those initial requirements, Heimerdinger said it’s still difficult to determine if the college player will translate to the professional level. Other than incoming quarterbacks, Heimerdinger said wide out is the toughest position on offense to pinpoint who to take and who to pass on.

It's a great read from Jonathan Hutton, and I advise everyone to check out the whole piece for some great insight.