Tennessee Titans Morning Links: The Caravan Is On It's Way, Sans Gypsies Edition

Share All sharing options for: Tennessee Titans Morning Links: The Caravan Is On It's Way, Sans Gypsies Edition 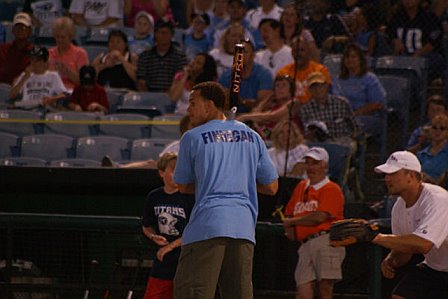 Cortland Finnegan is leading the Titans caravan through Memphis and Dickson today, so if you're in the area head on out there and find out what in the world he says to get al of those WRs to start taking swings at him on the field.

The Titans are pretty set at a lot of key positions on offense this year, but beyond wide receiver there are areas where the draft could be leveraged to greatly improve depth (offensive line) and prepare for departures after next season (tight end).  I think you could see those areas addressed on day two.

Terry McCormick chronicles the greek tragedy that are Titans draft picks at WR since 1997.  Not that there's any pressure on whomever we take at some point this weekend...

Always on the cutting edge of sports analysis, the Tennessean thinks Percy Harvin comes with some very real risks.

Lean your ear up to your monitor.  You hear those boots shaking?  It's the folks at SI.com after BJ Raji was cleared of their allegations that he failed a drug test.  Expect heads to role over there after botching a story that volatile.

Mike Florio has it on great authority from anonymous rumors that Mike Shanahan will be coaching the Redskins in 2010.  Give Daniel Snyder's whimsical affinity with headlines (he's risking becoming the George Steinbrenner of the NFL... sans the rings) you can't really discount the idea.

Memo to the Detroit Lions organization: your problem last year was not your logo,and the weak link was not your graphic design team.  Besides if you want a real logo, talk to smashville; he'll do ya right!