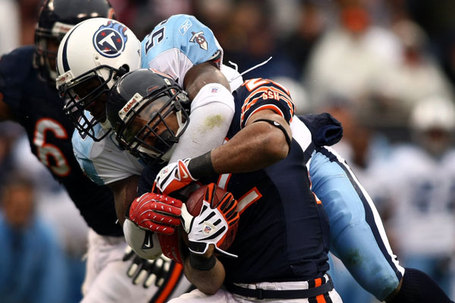 A source close to the situation said Wednesday night teams joining Washington in the Cutler sweepstakes include Chicago, Tampa Bay and Tennessee.

That's my boy, Mikey.  Now here's the deal that makes sense to Jimmy and I: our 1st rounder this year and next year, Bo Scaife, and maybe a little more sweetener like a late pick next year.  I don't know it that seals the deal, but it's a legit offer that fills some needs for the Broncos (who are weak at TE and don't want to pay the salaries required by super-high draft picks).

The Titans have requested that the NFL investigate tampering charges against the Washington Redskins since they pretty undeniably tampered with Albert Haynesworth, and the league appears inclined to check into the situation.

There was a special guest at Cortland Finnegan's karaoke benefit (hopefully we'll get some videos soon like last year) last night at Cabanas: Torry Holt!  Glad to see he was getting some love and experiencing the city as the free agent wide receiver prepares to meet with the Titans brass today.

Speaking of Torry Holt, ESPN's Scouts Inc. has an extensive breakdown of Holt's remaining physical skills.  Despite what he's lost, he is still brining more to the table than any WR we've had in several years.

Terry McCormick has notes on a slew of other NFL draft prospects who are visiting the Titans over the next few weeks, and a fascinating read on how Mike Reinfeldt is juggling the pre-draft visits, free agent negotiations and free agent visits all at the same time.