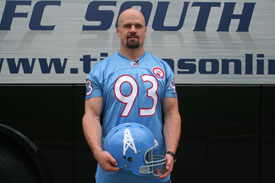 Yup. Still hurts, but these tight throwbacks help ease some of the pain... (hat tip to titansfan615)

While we've all gone over the memorable busts and let downs from recent drafts, we should stop to consider that the Titans have one very impressive streak going that noone else in the NFL can match:  We've gotten a Pro Bowl player in each of the last four drafts:

2006: Vince Young (who went in '06 as a rookie) and cornerback Cortland Finnegan, who made it this past season.

2007: Michael Griffin, who played in his first Pro Bowl in February

2008 : Chris Johnson... Johnson wasn't able to play in the game because of an ankle injury, but he was named to the team.

This Jim Wyatt post serves as a catalyst for a thought Jimmy and I have been talking over for the past few days: more on that later...

Paul K gathers together some mock drafts from prognosticators I don't put much stock in, but the growing consensus as I look around the internets has us focusing on Nicks and Vontae Davis... if recent history says anything it's nice to already know who we won't be taking!

If you want more mock draft results, here are all of the ones by nfl.com writers displayed side-by-side.

Here's a cool page for those with ESPN Insider subscriptions: they've taken 6 different mock drafts from McShay, Kiper and 4 other mainstream sites, then averaged-out where each player was taken in each mock to give them a composite value.  Who is the 30th guy?  DT Ziggy Hood from Mizzou.  I have a hard time seeing that happening since we can get D-line depth later on at a good value.

The full NFL schedule for the 2009 regular season will be announced tonight at 6:00 Central on the NFL Network and ESPN2.