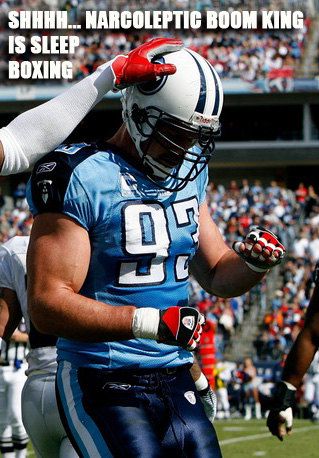 After signing Faggins and Ramsey, the Titans still have nearly $12.9 million left under the cap, and that's before the rookie cap is established.  $12.9 million should leave plenty left over to go overpay for an established WR on a giant one year contract... just sayin'.

If center Kevin Mawae is the unofficial locker room spokesman, linebacker Keith Bulluck the sergeant at arms of emotion and effort, running back LenDale White the conveyor of quips, then Vanden Bosch fits in as the flag bearer, the beater of the drum, a veteran whose effort paces the roster.

He plays the game with the same exertion he used while working at his father's construction company at age 12, hauling bricks, wheeling concrete, sweeping up trash in Larchwood, Iowa.

MCM could not confirm rumors that those same bricks were a staple of a young Boom King's diet, even if he plays like it.

Paul K. has a breakdown of the recent history of the no. 30 spot the Titans will occupy in the draft, and it's a spot with a history of pretty good picks if you're not the Chargers or Lions.

Terry McCormick talks with Boom King about the new 'Brady Rule' and how it will affect D-lineman.  My guess is you'll see a mountain of fines early in the season as guys get used to tackling QBs without getting their dresses dirty.  No word yet on how much of the money generated by the fines will be allotted to cover the dry cleaning of said dresses.

Here's an interesting read on what stood on the ground of LP Field before it was leveled to make way for the Titans' home: The William Gerst Brewery.  The founder's grandson opened the deliciously-German themed Gerst House just blocks away from the stadium, and it's still serving the best Jagerschnitzel in town.

If you want the NFL Network on your basic cable package with Comcast, be sure to keep an eye on this federal court case on Tuesday where the two sides will duke it out.  The NFL is claiming that Comcast unfairly favors offerings like the Golf Channel and Versus over their superior product.

Signabilty is the no. 1 concern for the Lions with their first pick because... well, they're the Lions and talent always takes a back seat.

Byron Leftwich is the newest addition to the Tampa Bay Buccaneers.