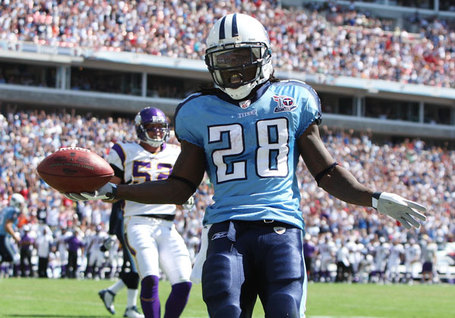 The Titans still have more work to do in free agency, though it's all depth additions at this point.  Here, Jim Wyatt goes through each position group and gives an update on the work that's left to be done.  The most interesting blurb concerns the running backs group, and it ain't good for LenDale:

Chris Johnson, coming off a strong rookie season, will be featured even more. Privately the Titans have concerns about LenDale White, from his off-field behavior to his motivation. Rafael Little, who spent last season on injured reserve, worked hard and has a better chance of being on the roster and contributing than Chris Henry. The Titans are also considering free agent and draft options.

Why haven't the Titans filled-up all of those depth spots yet?  Because some of the best bargains of the year typically show-up during this second wave of free agency, when guys who had delusions regarding their market value have crashed back to earth...

To that end, the Titans worked-out Packers restricted free agent (no compensation required to sign) cornerback Jarret Bush.  He's a versatile DB who can line-up at safety or corner, and who has drawn the interest of various other teams around the league.

Daniel Loper signed with the Lions and Jim Schwartz this weekend.  The signing isn't surprising to me, but I'm a little shocked that Loper would leave for a one year contract.  Then again, he's got a much better chance of beating out a starter there than he did here in Nashville.

If the Titans are interested in a 3rd QB to come in and compete with VY, there are some very capable and experienced options still on the market.

A charitable fund has been created to help the 25-year-old Nashvillian who was badly injured in that December car accident with Albert Haynesworth.  The kid had to have a hip replacement and is unable to pay his medical bills or find new work, so visit www.helpcoreyedmondson.com if you'd like to help.

Militant commenter Rustmeister sends along his take on the T.O. news from late last week.