Tennessee Titans Morning Links: How Does Albert Sleep At Night? On A Mountain Of Cash Edition

Share All sharing options for: Tennessee Titans Morning Links: How Does Albert Sleep At Night? On A Mountain Of Cash Edition 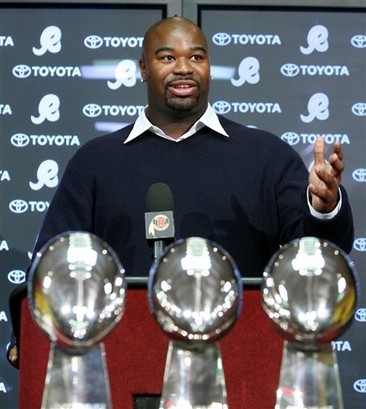 How close were the Titans to re-signing Albert?  Here's Albert's accounting of negotiations last July:

He had the team's proposal for a four-year contract worth roughly $32 million. And he was on the verge of taking it.

"It was frustrating, but I almost took it.

He also says the Titans never contacted him after the beginning of free agency.  Is he completely unaware of the fact that the entire sports world  knew roughly what the Redskins offer was two days before free agency started?  Why would the Titans even check-in after that when Albert was clearly about the paper?

Jim Wyatt hides a gem of a report inside this article on VY:

There were indications the Titans wanted Simms and Young to battle for the backup job in the May and June minicamps. One scenario the Titans considered — possibly trading Young had Simms won the backup job.

VY better get worried if they bring in another veteran back-up like Byron Leftwich, JP Losman or a Jeff Garcia-type.

Terrell Owens is a free agent because he's a friggin' nut bar; great reciever, but a total cancer. If you want him in the Titans' locker room then you're crazier than he is.

PFW has some good notes on the shape of our WR corps now that Nate Washington is pretty much the guaranteed starter next to Justin Gage.  Look for Lavelle Hawkins to have the inside track on the 3rd spot if he can get his head on straight in practice.

Derrick Mason could be on his way out of Baltimore as both sides squabble over a contract extension.  You think he'd be welcomed back into the fold here if he's let go?