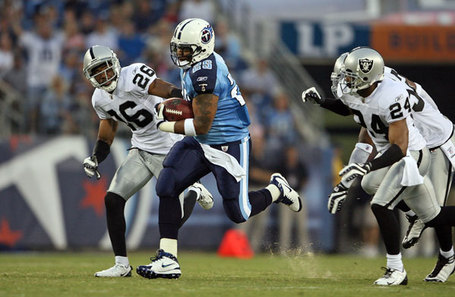 It's easy to focus on a few of the big decisions that were made regarding free agency this year, but next year will be the year when things get crazy unless some of these contracts get reworked this off-season:

The defense is where the Titans will have the toughest decisions to make, as those up for free agency include linebackers Keith Bulluck and Stephen Tulloch, defensive ends Kyle Vanden Bosch, Jevon Kearse and Dave Ball, defensive tackle Tony Brown and cornerback Nick Harper.

On offense, those at the end of their deals include center Kevin Mawae, guard Eugene Amano, tight ends Alge Crumpler, Scaife and second-team running back LenDale White. Long snapper Ken Amato can also be a free agent after ’09.

For those counting, that is six of the current 11 defensive starters, plus one of the top backups in the defensive line rotation.

And if Vince doesn't reclaim his starting job, you can add him into the mix as well...

Coincidentally, Jim Wyatt has a good read on Vince Young's dedication to doing whatever it takes to get his starting job back:

In fact, [Vince's agent] Major Adams said when the Titans re-signed Kerry Collins — essentially committing to him as the starting quarterback this fall — it only made Young that much hungrier to win back his old job.

"That decision has no bearing on Vince's thinking,'' Adams said Wednesday. "He is just trying to get himself together, not worrying about what they are doing with Kerry. That doesn't matter to him.

"Vince is not upset. He is not asking for a trade or anything. He loves the organization, loves (Titans owner) Bud Adams, and he wants to be in Tennessee. But he still wants to play, and is approaching this offseason like he's going to.''

The Sporting News has a full-spread interview with Albert Haynesworth where he says his main focus is to grow his family name into 'something great like the Rockefellers'.  Very noble Albert.

Chris Carr is visiting with the Patriots as former Jets CB/Return man Justin Miller comes to Nashville for an audition.

Here's a pretty thorough NFL Draft value chart that breaks prospects down by round.

Former Titans disappointment Ben Troupe is working-out with the Giants.