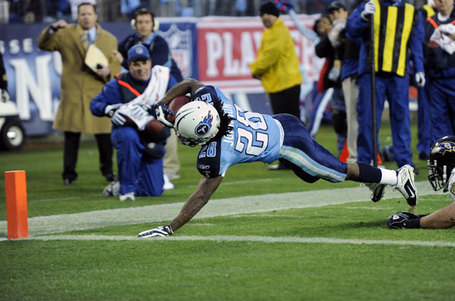 Lost in the tizzy over the Titans signing Nate Washington: will Nate bring his terrible dish towels?  I'm suprised he would sign with the Titans after they mocked and defiled everything pure and amazing about the Steelers, football as a whole and widdle bitty bunny wabbits.

Daniel Loper is visiting with the Lions (and would be a great pick-up for them, in all honesty), while there's no news on where Chris Carr may go after visiting the Browns yesterday.

Chris Simms is visiting the Broncos to audition for the back-up role left by Patrick Ramsey.  Maybe the Broncos' brass can pay attention to their work since they're no longer busy trying to torpedo the franchise...

The NFL has announced draft placement for the first 3 rounds, and the Titans are at the 30th spot in each of them.  We have a total of 6 picks right now (5th rounder went to the Cowboys because Pacman couldn't stay out of trouble), but that number will go up once the compensatory picks are announced soon.

Todd McShay continues the disturbing trend (Insider subscription required) of having us take a one-year-wonder defensive end who graded out as mediocre in his workouts:

The Titans have other needs at wide receiver and defensive tackle, but Ayers would be a far better value than any player available at those positions. Ayers did not have a great combine workout and is a bit of a one-year wonder, but he is a 272-pound end with impressive quickness and power. He could potentially serve as a contributing backup in a three-man rotation with Jevon Kearse and Kyle Vanden Bosch early on before developing into a full-time starter.

Paul K asks: If you could change one tenet of the Titans' franchise, what would it be?  I'd like to see them be a little more willing to more quickly cut some of the scrub DBs we keep around way to long like Donnie Nickey, Reynaldo Hill, Lamont Thompson, Mike Achols and Tony Beckham.

The Bengals re-signed running back Cedric Benson to a two-year deal after he performed pretty well towards the end of last season.  Though cheaper options were available, but the Bengals just couldn't risk losing such a potential cancer and criminal element as they struggle to stay in the NFL's gutter despite a stud QB.

Who knew the Jim Donaldson could give The Onion a run for its money: Has Marriage Cost Tom Brady His Competitive Edge?