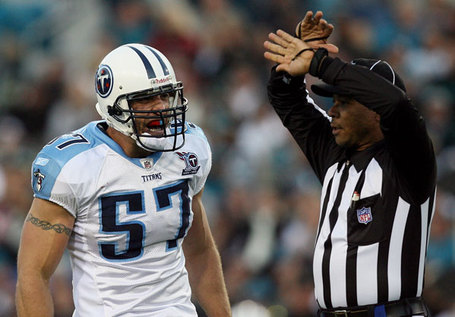 Deadspin digs up video of Albert Haynesworth and Vince Young at LenDale's birthday party back in December.  I have no idea who this Freddy B cat is but he always seems to turn-up with videos of Titans around town a few times a year.  This one is kinda dumb, and nothing scandalous to report (thankfully).

Matt Bowen read Fisher's thoughts on VY from last week and came away with a pretty different take than most: Vince Young is an Afterthought in Tennessee.  As Seth and Amy would say:  Really!?!

Well between the Hall of Fame Game, opening up the Cowboys new stadium and kicking-off the season on a Thursday night prime-time game against the defending World Champions, we can definitively lay to rest the idea that the NFL doesn't pay enough attention to our Titans!

Pete Prisco takes stock of the Titans' current roster and determines that we need a LB more than a CB.  Apparently he didn't watch Nick Harper last year, because we'd all admit he started to show his age despite having a great year.

FO tells what we all know, and what we've all been screaming: we need a WR.  However it's pretty cute that they think Gage can be a downfield threat.

Albert Haynesworth plead not guilty to charges stemming from his December 13th wreck.  For those not familiar with how Williamson country works though, he actually pled 'I'm rich', ensuring he won't see any jail time or a trial date during the season.