Tennessee Titans Morning Links: A Final Four Of Our Own Edition

Share All sharing options for: Tennessee Titans Morning Links: A Final Four Of Our Own Edition 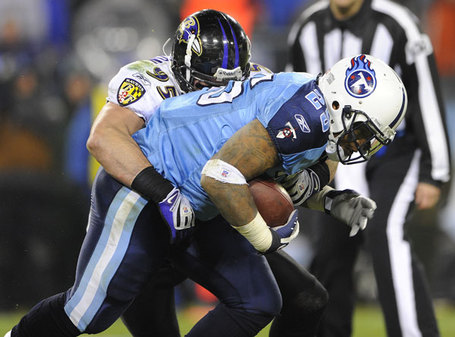 NFL teams across the league are preparing for their own Final Four: the final four weeks before the NFL Draft on April 25-26.  As that day draws near, ESPN (Insider subscription required) has gone through each franchisee' draft history to find their best overall class.  For the Titans/Oilers franchise the winner was the 1983 class, which brought in HOFer Bruce Matthews and All-Pro Keith Bostic.

Yahoo! says that while Kerry Collins lost 20 lbs. on his own during last year's off-season, his plan this year is to commit 100% to the Titans weight training regimen in the hopes of tacking on around 5 lbs. of muscle.

The New York Times has a draft preview for the Titans, and the Fan's Take comes from a MCM's pater familias, Jimmy!

30 days after the Cutler/Broncos saga began, things have so failed to improve that many observers in the Denver media are speculating that Cutler could be traded by the time draft day rolls around.  I hope the Titans are getting the house loaded into the catapult and aiming it west because they would be fools not to make a serious run at making this happen.  It's still a long shot, to be sure.

The Titans will be hosting speedy U. of Cincinnati 4-3 defensive end/3-4 linebacker Conner Barwin for a workout, further cementing the view that the organization is content to take the best player at almost any position when they come up for the 30th pick of the draft.

PFW thinks the Titans will use there bounty of comp. picks to swing a few draft day trades; even though compensatory picks can't be traded our original picks can.  Given the Titans' past behavior there will probably be some movement in rounds 3-5 thanks to the flexiblity these comp picks give us.

Here's a story on IMG, a massive multi-sport training complex in Florida that some may find interesting.  One of the players mentioned as training there this off-season is Titans MLB Ryan Fowler.