Tennessee Titans Morning Links: And He Probably Hates The Ravens Too! Edition

Share All sharing options for: Tennessee Titans Morning Links: And He Probably Hates The Ravens Too! Edition 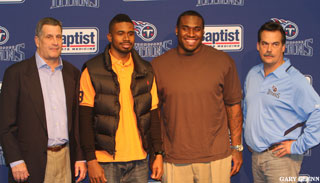 The Titans actually ponied-up a fair market contract for a WR.  Let that sink in for a minute... Nate Washington signed for 6 years, $27 million.  Washington has the pedigree the Titans like: undrafted free agent from Tiffin University, now lets hope he's got the skills and productivity we so desperately need.

Steelers O-Coordinator Bruce Arians has something to say about Washington:

"The guy (Washington) became a heck of a player for us. He takes the top end off the coverage… He's shown the ability to get behind people and that was the No. 1 thing Nate gave us, the ability to stretch coverage."

To early to do a celebratory dance?  I know Washington has to step-up but you can't tell me the guy isn't most likely an upgrade over every receiver we've had for 3 years not named Gage. And, while he seems a lot like Brandon Jones, Washington was stuck behind Ward and Holmes for the past few years.  There wasn't anyone holding Brandon Jones back but himself.  So no coming over here and pooping on our parade.

New Titans DT Jovan Haye signed my favorite kind of contract: a reasonable, but front loaded contract.  Almost $7 million of his 4 year, $16.2 million will be paid this year, which means if he's a killer he'll be a mega steal for the next 3 years.  While Haye is undersized and probably won't offer a lot of help against the run, he can be a devastating pass rusher up the middle if he has talent around him... the talent depletion in Tampa was a good part of why he went from 6 sacks in 2007 to zero last year.

Oh how sweet it would be to knock that twerp Dan Snyder down a few pegs:

Titans general manager Mike Reinfeldt said he did not rule out the possibility that the team would explore tampering charges over the Washington Redskins’ signing of Haynesworth to a $100 million deal just five hours into the free agency period.

"We were interested in signing Albert. We tried to sign him, and unfortunately, it didn’t work out. That’s always something we can address with the league, but at this point in time, we’re more focused on the two gentlemen we have here today," Reinfeldt said.

There were reports of a deal in place between the Redskins and Haynesworth in the days leading up to the opening of free agency, but Haynesworth’s agent Chad Speck refuted those reports.

"They clearly worked a deal that was good for Albert and it must have been good for Washington. That’s all I’m going to say," Fisher said.

In other certified non-genious news, Albert may have implicated the Bucs in tampering as well:

Explaining to Sporting News Radio’s The Monty Show regarding his decision to sign with the ‘Skins instead of the Bucs, Haynesworth had this to say:  "I felt comfortable with [Tampa Bay coach] Raheem [Morris], he seemed to be a good person and he’s going to be a good coach, and I thought they had a lot of upside."

And how did he allocate his time between developing a comfort level with Morris and balancing out the offers of the six teams who were supposedly causing his agent’s phone to "explode" and then ultimately negotiate from scratch a nine-figure contract in less than six hours?

Despite numerous reports of his impending retirement, punter Craig Hentrich will be back for his 16th season!  At this point in his career Craig has lost some boom in his leg, but he's still deadly at pinning teams on their own goal line (just ask Chicago), and is a rock solid holder who has the confidence of Bironas.

Chris Carr is visiting the Cleveland Browns today, but they already have a Pro Bowl return man and enough depth at CB that it would be a curious decision for him to sign there... unless he's drawn in by that great winning tradition.