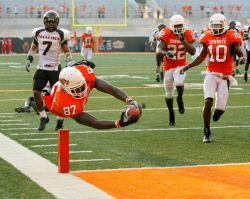 At this point in the draft I really don't feel like there is an offensive tackle that grades out at the first round, so even though this is one of the most glaring needs they will have to look to later rounds to fill the position rather than reaching for a Eben Britton, William Beatty, or Phil Loadholt. This left me to choose from the best players available in Aaron Maybin and Brandon Pettigrew or attempt to fill the hole left by Brian Dawkins defection to the Broncos. From here I decided to choose against Maybin because I didn't feel like he fits the scheme that the Eagles run and also against a safety replacement because I don't feel as strongly about Louis Delmas as a first round pick as those individuals at ESPN do. With the selection of Pettigrew and Beanie the Eagles fill the two positions hardest hit by free agency and actually in my eyes improved in both spots. The only problem I had with the selection of Pettigrew was that Brent Celek is a rising star and for the most part was a go to option for Donovan even when L. J. Smith was still on the team. So even though I chose a TE the Eagles could possibly go out of character and draft an OT 10 - 15 picks early, trade down for more picks, trade up for a star WR (Crabtree), or trade for a future number one pick as they have done previously.

He's not a burner but his size and blocking ability will provide Donovan with a huge target across the middle and one of the more reliable blockers on the outside than he has ever had as a pro.

The New York Giants are now on the clock..