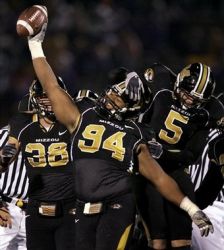 Though the Colts will undoubtedly be devastated that the rule changes at the recent owners' meetings did not include a provision to allow them to draft players off of the Titans practice squad, Hood will have to do. The Colts are notoriously weak at DT and he would bring some much needed bulk to their puny interior D-line.  Hood possesses a rare combination of strength and speed.  At 300 pounds, he still ran a 4.89 40 (tied for fastest among DTs) and threw up 34 reps on the bench press (one more than the 337 pound BJ Raji), giving him the most impressive all around performance of any DT at the combine this year.  The Colts, who value speed on defense above all else, will love the fact that they can get a guy with some beef who still has pretty quick feet for his size.

The Colts will probably be hoping that Peria Jerry falls to them, but with him off the board, as well as all of the 1st round quality WRs, Hood is really the only player that makes since for them here.  Hood is a heck of an athlete by the numbers.  The only question that remains is whether or not they can get anything out of a player at this position without Washburn doing all of the dirty work and coaching him up.

The Philadelphia Eagles are on the clock..