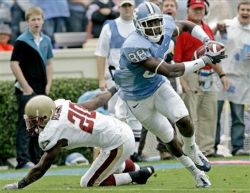 Hakeem Nicks really showed NFL scouts what he could do at the Mineke Car Bowl against West Virginia and has continued to impress this off season. The Ravens are in need of a number one receiver for Joe Flacco as Derrick Mason turns 35 this year and Mark Clayton has never been anything above mediocre. Nicks has some of the best hands of anyone in this draft class and has the playmaking ability that the Ravens will be looking for. Also considered at this pick was CB's Alphonso Smith and Darius Butler, and LB James Laurinaitis but I feel like Baltimore really wants to improve it's anemic offense first. Plus, if their defense struggles during the year they can just have Ed Reed bend the opposing team's best player's back in half, as was their philosophy this last season.

The Indianapolis Colts are now on the clock..