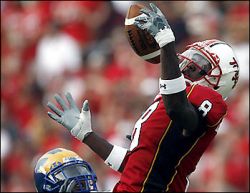 The Dolphin's significant needs are at the cornerback and wide receiver positions. They have addressed their need at the cornerback position by acquiring Eric Green from the Cardinals to replace Andre Goodman who departed via free agency and they still have their no. 44 pick to get a solid second rounder CB. Also, in terms of getting the best player available in their position needs, Darrius Heyward-Bey stands out.

At 6'2" 210 lbs. and having the fastest 40 yard dash in the combine at 4.30 seconds, no other receiver in the 2009 draft can match Heyward-Bey's combination of size and speed. The Dolphins are hoping that this combination will translate into Heyward-Bey becoming a Pro Bowl-caliber playmaker in the future.

The Dolphins are looking at Heyward-Bey to be the No. 1 wideout in a mediocre receiving corps last season which featured Ted Ginn Jr. who is more of a specialty player and a bunch of slot type WRs. The Dolphins didn't have a go-to-threat last year and they might find it in speedster Heyward-Bey.This pick maybe un-Tuna-like but it will be very hard for the Dolphins to pass on Heyward-Bey.

The Baltimore Ravens are now on the clock..