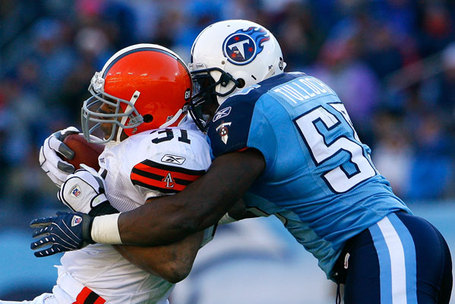 Terry McCormick tells us why the Titans didn't get the first visit from Holt (and apparently he's committed to making multiple stops, so don't expect Jacksonville to sign him right away): Fisher and Reinfeldt were locked-up in the owners meeting out in California throught the early part of the week.  Now that they've completed their duties there, expect the Titans to start working on getting Holt in for a visit and work-out.

Gary Estwick takes a quick look at how a longer regular season schedule would affect players salaries and contracts that are already on the books.

Paul Kuharsky has a thorough dissection of how AFC South teams address the WR position, and notes that only the Green Bay Packers (19, averaging at pick 144.5) have taken more WRs than the Titans (17 averaging at pick 121.1) over the last 12 years.

The Titans have scheduled speedy North Carolina running back Andre Brown for a pre-draft visit, because while I'd hate to drop another 2nd or 3rd rounder on a RB, I'd like to have the best running game possible.  He ran a 4.37 40 at the combine and measured in at 6'0", 224 lbs.

Make sure you check-out the SB Nation's writers draft at Mocking the Draft for updates and break-downs from a volley of writers who understand their franchises and team needs much better than the national guys.

Former Titan update: RB Jarrett Payton is still bouncing around in the CFL, and has had some success at times.  Jarrett (the son of Walter Payton) was a guy I think most of us really pulled for because he worked hard, excelled at the little things and never acted as though his last name entitled him to anything special.  I hope he's happy and finds a steady home up there.