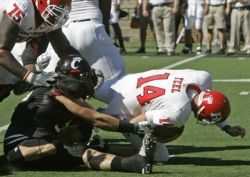 This might be a stretch of a pick for the Falcons here, but I like Barwin a lot. The Falcons need a lot of help on the defensive side of the ball after some key free agent losses. They also need to improve their pass rush dramatically. I went back and forth with numerous players---DT Ziggy Hood, DE/OLB Larry English, TE Brandon Pettigrew, S Louis Delmas, CB Alphonso Smith....and even some more guys beyond that. This pick would have been a lot easier had Matthews or Cushing still been available.

Barwin (6-4, 256 lbs) played DE this past season for Cincinnati, but played TE before that. He is very athletic, having even played one season of basketball for the Bearcats. He should be able to make the transition to OLB in the NFL. He recorded a 40 time of 4.5 at Cincinnati's Pro Day, so he has very good speed. He also had a 40.5 inch vertical leap. He can play OLB, DE, and even some TE if it truly comes down to it. He is a hard worker and very coachable, he would be a very good fit for the Falcons.

The Miami Dolphins are on the clock..