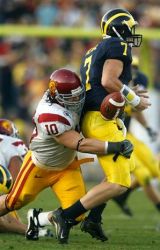 If I were the Patriots I would trade for Julius Peppers. If they had done so prior to this pick I would've gone CB, but from what I'm hearing this deal isn't looking as likely as it did before. There's still a chance they could sign Jason Taylor, but it hasn't happened yet. I think the Patriots go a long way towards reestablishing their pass rush and getting younger on defense with this pick. Cushing will likely line up at OLB for the Patriots. Cushing lined up at DE, ILB, and OLB while at USC so Belichick will his love his versatility. Cushing played TE in high school so his understanding of offense makes him effective in coverage, but he doesn't shy away from contact and attacks the QB with aggression. To quote nfldraftdog.com "He doesn't hit to make a tackle; he hits because he likes to. The harder the better." With an aging defense that has been soft the last couple years, the Patriots can use that kind of attitude. Cushing combined with last years pick, Jerod Mayo, will give the Patriots a solid young dou to rebuild the D around and allow them to continue cheating and annoying me for many years to come.

The Atlanta Falcons are on the clock..