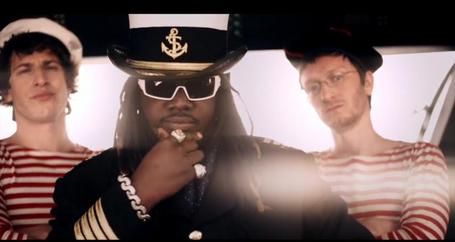 Torry Holt is on his first visit as a free agent, and it's a meet-n-greet with the Jacksonville Jaguars.  Hopefully it'll be short and sweet so we can bring him in for an audition.

The Titans have a theme for this off-season's work-outs: Unfinished Business.  That's much better than my suggestion, which was more of a nautical motif.

Mel Kiper suggests the Titans take advantage of their comp picks to add cheap playmakers.  Thanks Mel... hadn't thought of that one.

Todd McShay breaks-down the list of this year's best defensive lineman in the draft.

The commish acknowledged that he'd like to make all football fans very, very happy by reducing the amount of preseason games and increasing the regular season schedule to 17 or 18 weeks.  The only thing better than football is more football, so I'm in favor.

One key factor in extending the regular season: it opens the possibility of every team playing one game either on a neutral site (Titans vs. Ravens in Knoxville?) or internationally.  This idea is just terrible, IMO.

Dan Snyder will be happy to hear that the competition committee will most likely propose the creation of a negotiation period before free agency so the the league's tampering rules aren't such a laughing stock.

Bart Andrus, who was an offensive assistant for the Titans last year and is the head coach of the CFL's Toronto Argonauts this year, says Vince Young's skills don't fit in the NFL.