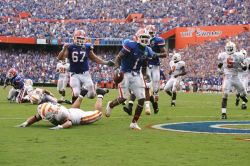 The Vikings would have an interesting dilemma if either Sanchez or Stafford were to fall to this spot. But since there's pretty much zero likelihood of that happening, and I'm not thoroughly enamored with any of the OTs at this point in this scenario, it's time to go for the ever-popular "best player available" and take the multi-dimensional threat from Florida. Harvin has outstanding speed (4.4 in the 40) and great moves in the open field. He can be used as a runner, a receiver, and as a kick/punt returner (despite never having returned a kick or punt in his college career). With Bernard Berrian and a hopefully improved Sidney Rice on the outside, the Vikings could use a threat like Harvin in the slot.

The New England Patriots are now on the clock..