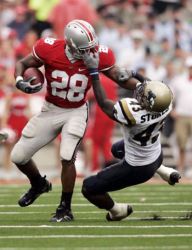 While the signing of Stacy Andrews didn't eliminate OL as a need in the draft, it no longer was a mandatory position that needed to be addressed the first round. Due to the fact that the Eagles lost Buckhalter to the Broncos in free agency the RB position seems to be of the most immediate concern because they need a back to share the carries with Westbrook to hopefully cut down on the amount of injuries he has during the season. Also at this point even though all reports say Westbrook and his knee will be 100% for OTAs by the time the season starts he will have turned 30 and we all know that after 30 it has been proven that this is the beginning of the end for running backs in terms of their ability to be productive backs. With his size Wells will be the perfect complement to Westbrook and a great short yardage back. But the biggest factor in making this selection was his recent Pro Day results where he showed 4.4 speed and apparently was extremely agile which hopefully means that he will be a component in the screen game that Andy Reid loves to run so much.

The Minnesota Vikings are now on the clock..