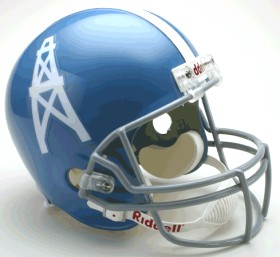 The Titans will wear one of my favorite NFL throwbacks at some point(s) this season: the Oilers' 60's era unis with the powder/Columbia blue helmet and white oil derrick.  Here Paul Kuharsky tries to deduce which game it will be.

Houston fans are understandably furious about the throwbacks, and John McClain says the Titans may don the throwbacks as many as 3 times next year.  I can always understand both sides of the argument when it comes to the history of the Oilers: Houston folks bled for those teams for a long time, but could you expect Bud Adams to just leave his life's work behind when he decided he had to move the organization?  I'm expecting a lot of trolls and outrage around here when the Titans break them-out for the Hall of Fame Game.

Keith Bulluck was on SIRIUS NFL Radio and advocated for one more big pick-up by the Titans: Torry Holt.  He says that Holts still has it, and they could tell in person during the pre-season practices the teams shared last season.  Make sure to check out our upcoming podcast for extensive coverage of the Titans' potential acquisition of Holt.

Participation in the voluntary off-season training program is nearly 100% according to Steve Waterson.  Other notes include Cortland Finnegan hosting another Karaoke themed benefit at Cabana (which produced a series of hilarious videos last year, like Boom King and Boom Queen singing 'Summer Lovin'), and the team's push to get Jason Jones into the 280 lbs. range after he played part of last season in the 260's.

Here's more lip service from Fisher about how VY is still the future of the Titans' QB spot...

Jovan Haye sure sounds like he's enjoying his 'homecoming' as he settles back into Nashville.  I just hope he isn't eating all of his meals at Cal's Country Kitchen (which is owned and operated by the family of Bills LB and Vanderbilt star Marcus Buggs), but having been there I can certainly understand why he would.

Here is the finalized progression of the Titans' draft picks, complete with the comp picks (which are designated with *):

The NFL reworked their deal with DirectTV is such a way that they're getting more money, and they're getting paid even if there's a lock-out.  The downside?  Say goodbye to the NFL network on any cable packages starting in May.  I'm assuming the league will continue it's policy of still locally broadcasting any Titans game that ended up on their network.