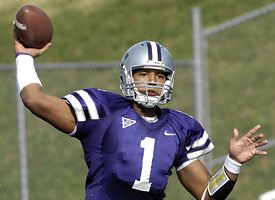 The Bucs are in full blown rebuilding mode, and they need a QB.  Freeman is raw, but a team in year 1 of a rebuilding period has plenty of time to develop a new guy with a lot of potential.  The Bucs new coach, Raheem Morris, was the D-Coordinator at K State in 2006, so rest assured he will have all the inside info on Freeman-  whether that will help Freeman's case, I do not know.
The major limitation of a Mock Draft is fully realized here though: no way to predict trades.  The Bucs are one of the teams that keep popping up in the Cutler hysteria, and if they do pull that off, QB will obviously not be the pick here.  The Bucs have an unbelievable mountain of cap space, so if they can find something the Broncos want on their roster (or this pick), they could break the bank on a new deal for Cutler and have a franchise QB locked up for years to come.  The other possibility that is also very likely is that the Bucs trade down and try to stockpile some more picks.  This Bucs team is probably not going to be very good this year, and they have a lot of holes to fill, so unless they really like Freeman (or someone else) here, my best guess is that they won't pick in this spot at all.  Whether or not it's because they want more picks or because they send the pick to Denver for Cutler remains to be seen.

The Detroit Lions are now on the clock..