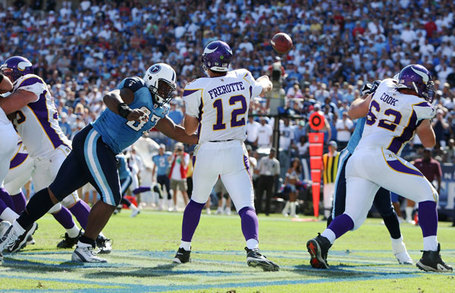 Who is the most valuable Titans of them all?  I'm going with Bulluck: he's the leader of the defense in every way, and that role is even more important now that Albert is gone.

Paul K thinks Bus Cook is getting a retro-active bad wrap for how the Steve McNair situation played-out, and he's probably right.  Still, it adds to the growing list of evidence that Bus Cook is a little bit of a southern Drew Rosenhaus since so many of his clients end-up in very public squabbles.

Peter King is reporting that the Titans may very well end-up with the prime-time season opener against the defending world champions.  He also has one other awesome note/prediction:

6. I think, on the other hand, Torry Holt is bound for Tennessee. He's going to like running under those Kerry Collins bombs.

The 2009 NFL annual meetings kick-off today, so expect a flurry of stories this week related to the potential work stoppage/uncapped year, rules changes and trade fodder as the league's executives and personnel guru's come together.

Mike Florio theorizes that when the Broncos leaked the fact that 10 teams are interested in trading for Cutler, they were opening the bidding and putting the embittered QB on the block.  If that's the case then they probably got 10 more calls within the next hour.

The Chicago Tribune claims to have a list of Wonderlic scores from this year's combine.  Of course I'd advise that you take these reports with a grain of salt; not only because the actual scores as reported may be unreliable, but because an eMode.com 'Which Dog Are You' personality test probably has more relevance to the football field.  Still, some of the results are still interesting: