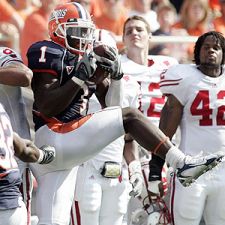 After being heralded as the elite CB prospect of the 2008 class when he first declared, Davis has seen his stock drop lately.  Still, he's a definite 1st rounder and the kind of high-ceiling player the Jets would take a chance on.
Under new head coach Ryan the Jets will be a defensive-oriented team that blitzes and relies on CBs who can cover and play a physical bump-and-run style.  Rex Ryan needs a talented corner to start opposite of young stud Darrelle Revis, and Davis should fit the bill.   Davis is one of the few CBs in this draft who has the combination of size and speed to make it work.  Percy Harvin is another option here, but expect Ryan to make a statement with this draft that there's a new regime in town.

The Chicago Bears are now on the clock..