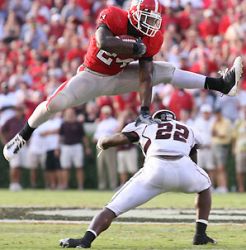 Long-time Chargers fans might not want to admit this, but the truth is the
truth: Ladanian Tomlinson is getting old. He will not ever be again what he
once was. And although he played pretty well in the playoffs, the idea that
pure scat-back Darren Sproles can carry the full load next season is just a
fantasy. And so, although I really wanted to pick on Defense with this
pick, at this point most of the best Defensive picks seem to be taken.
Taking yet another LB/DE seems a total reach at 15, so with that in mind,
the Chargers will try to strike gold twice in one decade by picking
Knowshaun Moreno, a guy that I think is one of the most electrifying RBs
I've ever seen.

The New York Jets are now on the clock..