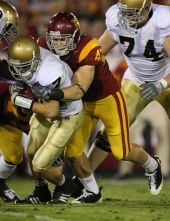 With no surprising slips to #15 in this particular mock, this was an easy
choice. The Texans need an upgrade at OLB, and though he's not a lock to
play the SAM side, that would be his ideal landing spot on the team.
Matthews can rush the passer, and he can close on the ball-carrier as fast
as anyone. By now most people know about his incredible 10-yard split
time (1.49) which was faster than anyone else at his position - and faster
than many corners and running backs.

Matthews doesn't have as much natural talent as some of the other guys I
could take in this spot, but his intangibles are off the charts. Some
would argue that Brian Cushing is a better choice, but I'm not sold on
him. He's had a lot of injury issues, and hasn't shown the flashes that
Matthews has when it comes to rushing the passer. When your #1 offseason
priority is to fix a broken pass rush, a prospect's ability to get to the
quarterback should be the tiebreaker if you're not sure which prospect is
the best fit.

Matthews also has the bloodlines, of course - but that had no bearing at
all on my selection. His work ethic, aggression, and raw physical
attributes simply put him over the top. I think he's going to be a very
solid, consistent player in this league.

The San Diego Chargers are now on the clock..