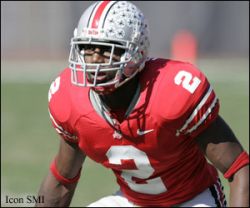 The Saints main needs are on the defensive side of the ball. They are looking for help in the secondary (especially FS, after signing Jabari Greer) and the OLB position.  Jenkins won the 2008 Jim Thorpe Award as the nation's best college defensive back.  Jenkins has good size (6'1").  He's very physical at the line and has a strong punch to knock receivers off their route. His tackling is very good for a DB (proved by his 13.5 tackles for loss in 52 games).  He could play FS or CB in the pros.  Personally, I think he's going to  be a safety in the NFL, filling one of the Saints' needs. To quote Charles Davis, of the NFL Network, "Corner?  Safety?  Player!". And the Saints can be sure they're taking a great player with this selection.

I considered taking one of the USC's OLB. Also, I heard some rumors in some forums that they should take Beanie Wells to replace Deuce McAllister. But seeing Malcolm Jenkins here, it was a no-brainer.

The Houston Texans are on the clock..