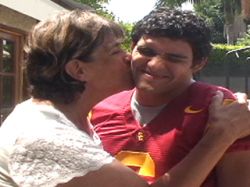 OK, I know that the Redskins have Jason Campbell, but there are several reasons why I went with this pick.  One, I think he is the best available player (better than Stafford).  Two, the 'skins need some help at OT, but we have had many of them go off the draft board already.  Three, Coach Zorn is a QB guy, I think he would love to bring in his own guy and start gearing him for the future.  Four (most likely), trade bait, I think someone would trade to get one of the QB's by now, if not...then in this spot.

I could see the Redskins trading down, getting some extra picks and then going after an OL or DE, that (said with tongue in cheek) Daniel Snyder has more than likely already agreed to terms with him!  Do I see them taking a QB here?  Not really, but if the draft falls the way we have had it to this point, I don't think it would be a horrible pick.

The New Orleans Saints are now on the clock..