Vince Young: Better Value On The Titan's Roster Or In A Trade?

Share All sharing options for: Vince Young: Better Value On The Titan's Roster Or In A Trade? 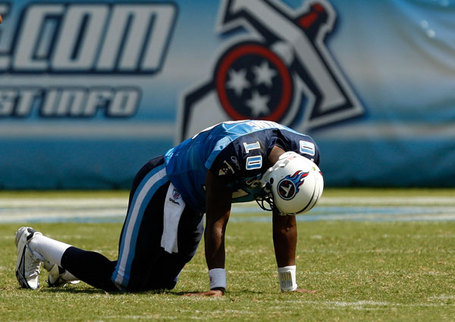 Football Outsiders contributor Ned Macey has an article on espn.com covering the NFC North (Insider Subscription required) in which he makes an interesting proposal considering the conventional wisdom is that VY has little-to-no trade value:

With a team designed to win right now, there are two potentially palatable options in trade. Matt Leinart and Vince Young have become linked as busts from the 2006 draft, but neither's really had much of a chance to prove that he's a bust...

Young became a much more accurate quarterback in 2007, even as his touchdown-to-interception ratio dropped. He's had all of 31 starts as a pro, and considering the lack of receiving options around him, it's pretty harsh to already place him firmly in the "bust" category.

Buying low on either Young or Leinart gives the Vikings the chance to acquire a potentially elite quarterback on the cheap. Either one should be an upgrade on the devil they already know.

This isn't telling Titans fans much they don't already know, but any positive statement about VY by a reputable analyst deserves pointing out these days! It's also nice to see someone talk about VY's future without being a mouth-breathing... (you know what I wanna say) pessimist.

So, what do you folks say: if there were no salary cap implications would you rather the Titans hang on to Vince for another year to see if he can still have a great NFL career, or would you take a low-end draft pick?

* I'd like to note in advance that it was not my intention to make my boy Superhorn's head explode with this post.