Tennessee Titans Morning Links: Back On The High Horse Edition

Share All sharing options for: Tennessee Titans Morning Links: Back On The High Horse Edition 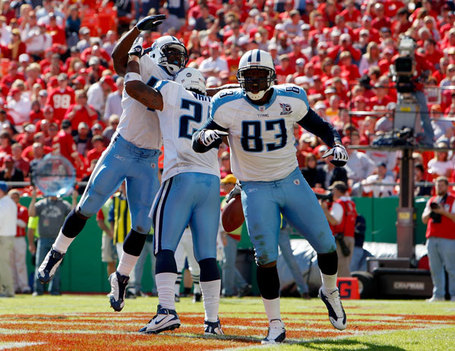 The Tennessean sits down with long-time Titans strength and conditioning coach Steve Watterson to talk about the off-season conditioning program which has just started.  I can't see a picture of Waterson without remembering him tossing a cup of chicken noodle soup on Jerry Porter before a game several years ago.

This is also the same article where we find out that LenDale weighs 20 lbs less than he did last year.  This is the case because he's a jackass who wasn't motivated enough to get in shape during a non-contract year.  If ever there were an NFL player who will tank it after a big contract extension it's LenDale White.

That being said, it wouldn't surprise me if Crazy Legs and LenDale both broke 1,000 yards this year.

Today is the Vanderbilt Pro Day, and it's make-or-break time for possible 1st round pick D.J. Moore.  If he can make-up for his poor 40-time at the combine D.J. could jump right back into the mix for the Titans at the 30 spot.

Paul Kuharsky has a small novella on Kerry Collins, and only waits a few paragraphs to get the money quote from my new favorite talker in the locker room, Justin Gage, on why Kerry has the starting gig locked-down:

Everybody looks to him for his leadership and his ability, sees that he's here already working out, that he's got guys coming in. We're getting our work together, our chemistry. You can definitely tell that this is a team that's going to grow behind him.

Don Banks thinks football fans and media couldn't talk about Cutler more than they have lately, even if - as he jokes - AIG was paying his bonus.

Hey did anyone else notice that the 2006 QB class hasn't worked out like most folks expected?  Crazy stuff...