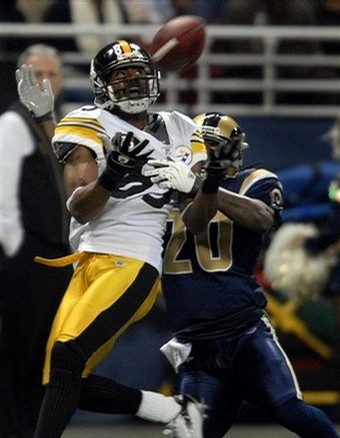 via Terry McCormick at the City Paper:

The Tennessee Titans and representatives for free agent wide receiver Nate Washington have agreed terms on a free-agent contract.

Terms of the deal are not yet known. The Titans have called a 5 p.m. news conference.

The Titans also agreed to terms with former Vanderbilt defensive lineman Jovan Haye. He is expected to help fill the gap left by Albert Haynesworth.

Both Washington and Haye are going to be expected to contribute heavily next season since they play at positions which lack depth and experience.

just for fun, here's Scouts Inc.'s report on Nate Washington (Subscription Required.  I'm pretty sure this is from the beginning of last season):

Comment: Washington has good height, more than enough speed to stretch the field and rare leaping ability. He makes several highlight-reel catches every season, but he also drops catchable passes that hit him squarely in the hands or chest. He remains remarkably inconsistent, but he has shown consistent improvement and clearly has tried to address his deficiencies. His route running is improving, but he still bends too many routes and has just average ball skills. Washington is young and still very much a work in progress, but he offers a fair amount of upside. He finished last season strong and could build on that momentum.