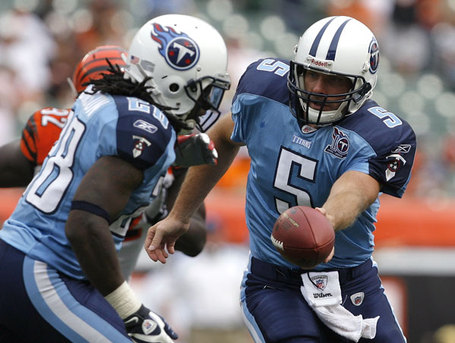 Nate Washington has a short list, and the Titans are on it.  He still has interest coming from Detroit, Baltimore, Cincy and Tampa Bay.  I think the question the Titans front office is wrestling with here is whether Washington is more like Brandon Jones (shifty disappointment) or Derrick Mason (savvy veteran)... The Titans have also been in contact with Saints burner Devery Henderson.

Chris Carr continues to explore free agency, and he met with the Lions last weekend.  Carr is definitely one of those mid-level guys who I could stomach slightly overpaying just because he means more to us - especially in the return game - than he would to most other teams.

My boy Pinoy points us towards this Terry McCormick report from the weekend where the Titans are taking a good look at a former Vanderbilt stud Jovan Haye.  I'll have to admit that, while Haye was a killer at DE for Vandy, I never saw much pro-potential in him until his break-out 2007 performance where he notched 68 tackles with 6 sacks.

• My gut continues to tell me that Chris Simms will likely re-sign in Tennessee, where he believes he might be in position to backup Collins if the Titans ship the enigmatic Vince Young away. To repeat, Young is not a given to return to Tennessee in 2009, and Titans owner Bud Adams is no longer playing the role of protector for the team's 2006 first-round pick.

I'm not really buying this report, but I can't say it would the worst thing to ever happen to Vince.  Maybe he's at the point where he just needs a fresh start, but I'd like to see what Heimerdinger can do with him after this off-season.

Peter King has a fascinating break-down of Chris Canty's brief trip through free agency, which includes several mentions of the Titans being an early favorite for his services.  What's not given though, is why Mike Reinfeldt and the Titans soured on Canty so quickly.  Reading the tea leaves though, it sounds like our interest in Canty was just a bargaining chip against Haynesworth because once that deal was inked Mikey didn't even take a visit from Canty.