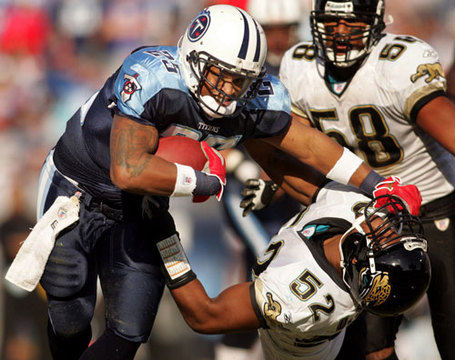 August is getting a much deserved day off from the links today.  Here are two links I found that could start some discussion (In other words, when all else fails link to a Vince Young story).

Jason Cole took a look back at the QB class of 2006.  The "current offensive coordinator with an NFL team who didn’t want to be identified" absolutely killed Vince Young.  Here is just a portion:

"The kid can’t throw. He just can’t. Worse, he still can’t read coverages. The Tennessee passing game with him is either throw it underneath or throw it deep because he’s scary on the mid-range stuff. He has no touch on half his throws and no idea where the defenders are on the other half … I’m being brutally honest and this is hard because he’s not a bad guy, but he’s soft and he doesn’t understand how much work he has to do to get better."

LenDale White reported to the offseason program 20 pounds lighter than he did last season.  Here is an equation: Contract year=More dedication in the offseason.  I can already see how this plays out, LenDale has a great season and makes a lot of money from someone other than the Titans when free agency 2010 rolls around.

Personally, I am excited to see what Rafael Little can do.  He is a more similar back to CJ than LenDale, but that might be exactly what this team needs.

There are a couple of things to get you talking.  August will be back in his usual time slot tomorrow.